5 Marketing Lessons Learned from the St. Louis Blues - BenchmarkONE
Back to Blog
Don't forget to check out our resources section! 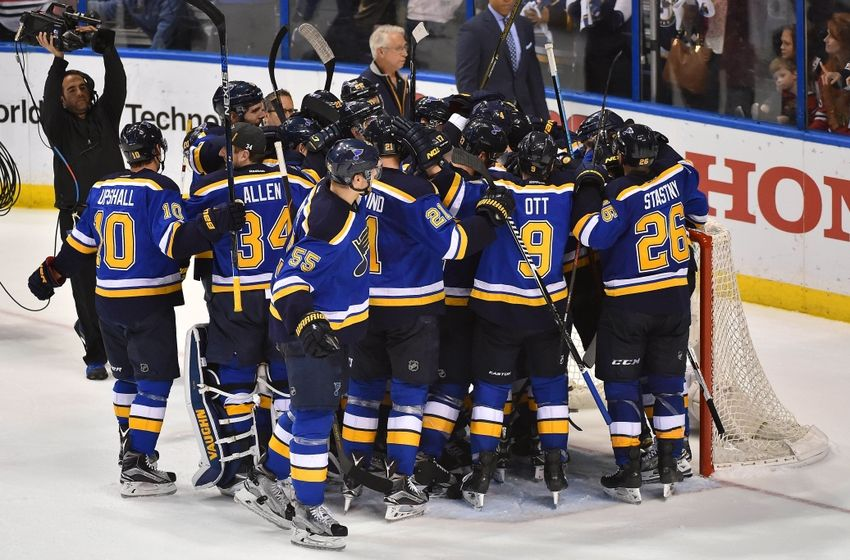 St. Louis (Hatchbuck’s HQ) is ranked as one of the best sports cities in America, according to the Wall Street Journal. So it’s no surprise that diehard Blues fans and St. Louisans as a whole have ignited the city with excitement and energy as the Blues head into game 5 of the conference finals against the Sharks.

Like in most cities, sports are a galvanizing force that brings the community together. For years I have been a Cardinal and Rams fan, going to games with my family and building lifelong memories. When it comes to the Blues, though, I have to admit, I have been somewhat of a casual follower.

This year, however, it’s different.

I haven’t missed a Blues playoff game yet. The question is, why am I hooked?

The Blues have done an amazing job of connecting to die hard fans over the years and have also found a number of ways to reach casual fans like myself through their marketing efforts, helping them to grow their fan base.

So if your business is looking to better engage with your audience and connect with new and existing fans, here are 5 marketing lessons learned from the St. Louis Blues that can help:

In an era where some would rather give up their left arm than part with their mobile device, social media is nicely positioned to help brands to create a more personal relationship – right where customers and potential customers are.

One way the Blues make social more personal is by connecting with their fans via Twitter. They launched the hashtag #WeBleedBlue as a movement to unite the community and allow fans to share their passion for the Blues hockey team:

My yard is better than yours

The Blues marketing team also responds in a real and authentic way with their fans on social, creating a more personal experience for their customers. A great example is their interactions with a new hockey fan, Anthony Holmes (@Soloucity) a.k.a. “Tony X”.

We all have followers on social media that post about our business or our industry.  But the St. Louis Blues took engagement to the next level and reached out to Tony to start a conversation:

They even invited him to game 3 of the Stanley Cup Playoffs:

Then, the NHL jumped into the social media madness:

Tony’s twitter followers exploded from 1,600 to over 90,000 followers and he even found himself on Good Morning America and interviewed by Yahoo sports. The sudden rise of this social media sensation became a great way for Blues to promote their business in a personal way and extend their reach beyond their existing fan base.

Your fans are on social media right now. If you’re not using social to reach them with a personal conversation, you’re missing out. Social media outreach is an effective way to join in on what is being said about your brand and gives you a chance to show an authentic side to your business. So if you are going to market your biz on social, keep it real.

If you watch playoff hockey then you know that players around the NHL grow their beards during the playoffs. The St. Louis Blues took this tradition and turned it into a simple and fun contest for their fans:

The Blues Beard-a-thon® is a creative marketing strategy incentivizing fans to grow their own beard during the Stanley Cup Playoffs, win awesome prizes and help raise money for charity. Contests are a great way to grow your fan base and increase engagement with your audience. Promoting user generated content on social – like videos and pictures – can organically boost the reach of your business and build a community around your brand.

As an added bonus, contests allow you to capture data from your target market. You can obtain basic contact info, like name and email address. And, depending on the type of contest you run, you can find out even more – like a participant’s preferences, their title or profession, or what company they work for. With contest data, you can segment your participants and continue to market to them with personalized messaging through channels like email marketing and retargeting – nurturing your relationship with your brand fans for the long haul.

When Stan Kroenke decided to move the Rams to Los Angeles, it left a deep void in the St. Louis sports community. While the fans were in shock mode, it didn’t take long for the Blues to step up to the plate.

Within days of the NFL announcing the Rams move to LA, the Blues worked with the Cardinals to drop the first puck at the Jan 14th hockey game. It was a timely message by the Blues PR team to the fans of St. Louis, that the Blues stand united with the other sports teams in #STL and it’s audience:

The Blues give a great example of how to leverage PR opportunities to the fullest. The Blues could easily look at the Cardinals as a competitive business for the local entertainment dollar. Instead, by partnering with another successful business, they seized the opportunity to put their brand front and center and take advantage of the trending conversation.

Are you missing key PR opportunities to promote your business? Is there a recent change within your industry? Is there a national trend you can hitch your wagon to? Maybe there are strategic partnerships you can tap into to further grow your brand and drive sales.

The Blues have always had their die-hard fans. But, like any business, the Blues have to continue to improve the product on the ice to grow their fan base and be a team their  audience wants to engage with.

Last year the Blues had a rough time in the playoffs, exiting in the first round after a successful regular season. High hopes dashed, they found themselves in the offseason with tough questions to answer. The decision was made to let go of some high profile players even though they were fan favorites. After all, the ultimate goal is to win a Stanley Cup, and the Blues felt that changes had to be made to get there.

The Blues narrowed their focus on fostering a better culture in the locker room and bringing in that added playoff experience. The result? A more cohesive team aligned to the mission of producing a better product for the playoffs and winning the championship.

As a business, it is so easy to keep your products at status quo and get frustrated when marketing doesn’t drive the growth you are looking for.

But is your product worth marketing?

Like in sports, winning products sell. Even the best marketing in the world can’t propel a tired or misaligned product. A key to capturing not just the wallets but the hearts of your customer is a commitment to delivering great products.  The Blues’ passion about delivering a great product in the playoffs shows and it has fueled their efforts of reaching more fans.

Gerry and Wyatt Nelson from Saskatoon were invited to game 2 of the Blues vs. Sharks playoff series this year. It’s not the first time that the Blues have connected with their passionate fan base and offered fans to attend the games on the house. But this one might be the most meaningful. Gerry became legally blind at the age of 26. His son, Wyatt, has been the eyes of the game, calling the play-by-play for his dad in the stands at the Saskatoon Blades hockey games: The Blues picked up the father/son story from an online video, which prompted a phone call to the family from Doug Armstrong, GM of the St. Louis Blues, and Kelly Chase, the Blues announcer and former player. The St. Louis Blues offered for Gerry and his son to be their guest for their playoff game against the San Jose Sharks. Wyatt even got to spend time in the box announcing the play by play of the game. It was an experience of a lifetime for Wyatt and Gerry and a great opportunity to let people know what the Blues stand for – making a difference in the lives of hockey fans, not just selling tickets.

Often, when we’re doing our best to run a business, our marketing initiatives focus so heavily on driving new customers and growing sales that making a difference to our fanbase gets lost.

Have you made a difference lately?  Look for ways to make an impact with your marketing by mentoring kids in the community, organizing a 5K for charity or even making a simple gesture like sending a thank you note to your customers.

When your goal is to make a difference – not just to make a buck – you connect with your audience in a more human way, building brand authenticity and fostering goodwill.

If your business could use a little marketing inspiration, look no further than the St. Louis Blues. They have shown great examples of how being personal on social, building an awesome product, and making a difference with their fan base has attracted a whole new fan base – myself among them. For me, I am no longer a casual fan, I am all in. The Blues have pulled on my heart strings and have given me more than a few reasons to cheer for them this season and beyond.

How to Bridge the Sales and Marketing Gap with Lead Nurturing